At Salt Lake City International Airport (SLC), it’s never too early to start prepping for winter operations. In fact, the first deicing operation took place on September 30, which was the earliest date ever. Crews have dusted off their winter coats and powered up the deicing machines in preparation for cooler temperatures. 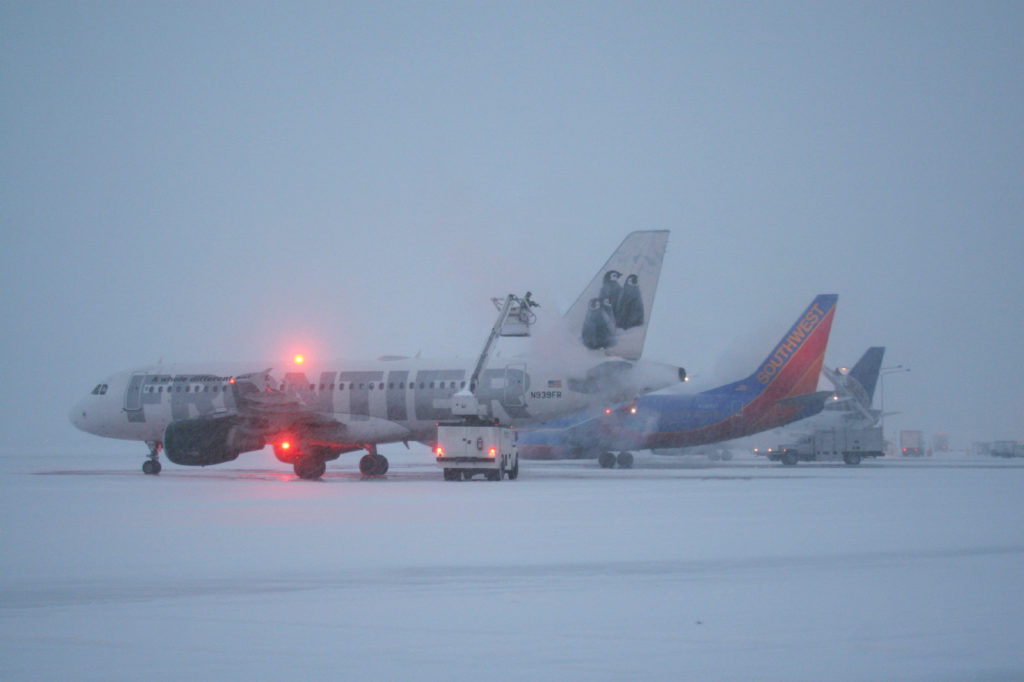 When the temperature drops, the result is ice, snow or frost collects on an aircraft’s surface.  Since airplanes must have clean surfaces to fly safely, any type of contaminant—such as ice or snow—has the potential to interfere with a safe take-off due to the disruption of air flow. That’s why during the colder months, deicing is crucial for a safe departure.

Integrated Deicing Services (IDS) does all the deicing at SLC for all airlines except for Delta who does its own deicing. Deicing operations typically commence once temperatures drop below 30 degrees, or generally from October through April, and pilots have the discretion to request services at any time.

“The amount of time it takes to deice an aircraft can vary,” said Randy Hubbel, General Manager for IDS. “With frost, it can take anywhere from 6 to 10 minutes to complete. In an actual snow event, depending on how much snow or how heavy it is, it could take anywhere from 10-40 minutes. Heavy, wet snow will take about 30 minutes, and that’s with three deicing trucks working the aircraft.”

Type 1 glycol deicing mixture contains between 30 and 40 percent glycol and is mixed with water to remove ice, snow and frost from an aircraft. Type 4 glycol is 100 percent glycol and is used to keep the aircraft contaminant-free as it waits to depart the airport. Depending on wind speed, temperature and the type of precipitation falling on the aircraft, the Type 4 glycol can keep contaminants off the wings anywhere from 45 minutes to an hour before takeoff.

“The airport deicing facilities are state-of-the-art,” said Hubbel. “At most airports, these tanks are stored outside. But here, it’s in a facility where temperatures are controlled.”

Though deicing can cause slight flight delays, it helps keep everyone safe when flying during the colder months. The next time your plane sits on the deice pad, if you happen to have a good view of the crew, give them a smile or a nod to let them know their work is noticed and appreciated.