Since 1961, thousands of passengers have walked around the world by simply passing through Terminal 1 at the Salt Lake City International Airport (SLC). This is the location of the iconic World Map where travelers have traced their travels from SLC to areas around the globe for almost 60 years. 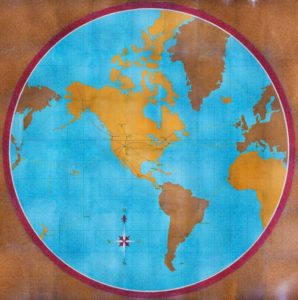 Salt Lake City records show Julius Bartoli—a skilled stoneworker with J. Bartoli Co. of Dallas, Texas—designed the World Map. The airport architects—Ashton, Evans & Brazier—submitted a drawing of the World Map concept, but J. Bartoli Co. was the subcontractor who installed the terrazzo to create what was initially called the “Map Medallion,” in the Terminal at Municipal Airport Number One—now known at SLC International Airport.  J. Bartoli Co. worked on many government projects in the 1930s through the 1970s, including the star map diagram at the Hoover Dam.

Little else is known about how the design came about, however, much more information is available about the map’s installation process. In a subcontractor document dated 1958, materials listed for the map installation are outlined and include white cement, sand, mesh, dividing strips and marble chips.

Preparation to install the World Map began with the following instructions: “Cover structural slab with dry sand ¼” bed, over which lay the building paper.” Followed later by “install ½” expansion joint material around columns and walls.”

The next step was to create a mortar underbed before installing zinc dividing strips and laying the terrazzo topping. Instructions read: “Proportion terrazzo mixture for topping in ration of 200 lbs. of marble granules to 100 lbs. white Portland cement with addition of non-fading, lime proof mineral pigment.”

Salt Lake resident Chano Rubalcava was one of the World Map installers and remembers it took about six months and four craftsmen to install the terrazzo that made up the image. The curing process alone required six days—during which the floor was to remain constantly moist—while the finishing process required a 72-hour wait period after the floor had been grouted. Bronze letter inserts were set into the dry pack to create the map routes and borders. Click here to see an interview with Mr. Rubalcava.

The meticulous work by skilled craftsman that went into creating the World Map has left a lasting impression on many visitors to SLC. The map has been photographed and color enhanced and will be hung in the Meeter-Greeter area of The New SLC for all to enjoy.