If you’ve visited the Salt Lake City International Airport (SLC) over the past 28 years, chances are you’ve seen JC Wilson, shoe-shiner extraordinaire at Goodfellow’s Shoeshine. Positioned at the top of the escalators in Terminal 1 after security screening, he sits in a leather-backed chair in front of his elevated wooden workstation, waiting for customers and watching passengers make their way through the airport.

At 6:00 a.m., he’s open for business. It’s hard to give an accurate description of how many customers he sees a day, JC says, because traffic and demand ebbs and flows. Depending on the flow of customers, though, he’ll stick around as long as there are shoes to shine. 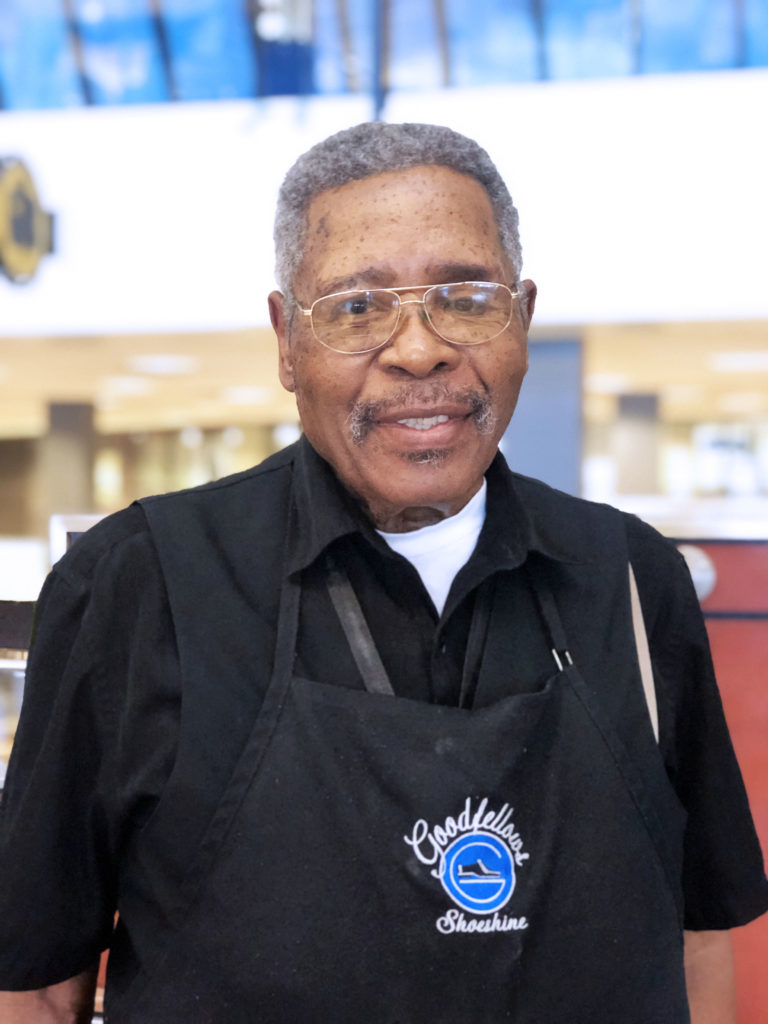 “It’s different every day,” says JC. “Sometimes it’s a madhouse, sometimes it’s quiet. You never can tell, you’ve just got to play it by ear. As long as people are here needing my services, though, I’ll stay all day!”

There’s never a dull moment at the airport for JC. He encounters people from all over the world, and from all walks of life, and that’s the way he likes it. JC remembers a time when, unbeknownst to him, he was shining the shoes of a famous person. Were it not for an enthusiastic traveler passing by, Wilson might have never known he was shining Colin Powell’s shoes.

“I do a lot of work with my head down,” JC explains. “So I’m just shining his shoes, not paying attention to the customer’s face. That’s when a passerby in military fatigues engages him and says ‘I just saw your picture in Jet Magazine and you were in uniform, but I can’t remember which branch.’ And my customer replies ‘sir, at one time, all of them!’ And that’s when I looked up and saw that I was shining Colin Powell’s shoes.”

A lot has happened in the 28 years that JC has worked for Goodfellow’s Shoeshine at SLC. Get him talking about how much things have changed over the years, and how things are continuing to change with the construction of The New SLC, and he’ll tell you about a quieter time when the airport was just a single building.

“There used to be a little dusty parking lot across the street where the post office is,” he says. “You could turn in there and park and head to the observation area where you could watch planes take off and land.”

Regardless of the seemingly constant changes happening all around him, JC loves his perch at Terminal 1. The people he meets, the interactions he observes, the conversations he has with his customers as he shines their shoes, are all constant pieces of the job he’s loved for 28 years.

On your next trip through SLC, be sure to swing by Terminal 1 and see JC. Stop for the shoe shine, stay for his wit, charisma and stories. It will be a charmed interaction you won’t soon forget.