The Salt Lake City Dept. of Airports (SLCDA) Executive Director Maureen Riley announced April 13 plans to retire the end of June. Maureen has served as the Airport executive director for the past 10 years. She was appointed to the position by former Salt Lake City Mayor Rocky Anderson in February 2007.

Maureen’s experience in both finance and construction has been a tremendous advantage for the City and has proved to be an asset for the development and design of The New SLC. Maureen has been credited with gaining approval from the airlines that serve SLC for the Airport redevelopment and for creating a successful program to get the job done.

“It’s very gratifying to know that the Salt Lake City International Airport is now positioned to meet passenger growth well into the future,” Maureen commented. “I’ve enjoyed a great relationship with our tenants, customers other stakeholders, and also, dedicated Airport employees who work hard every day to make SLC the best.” 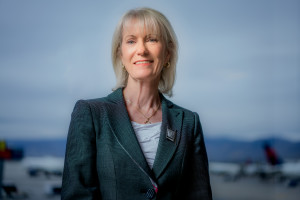 “Maureen has been an incredible director of our airport during a historic era of passenger growth, and has been a steward of the facility’s largest-ever construction project,” said Mayor Jackie Biskupski. “She is highly respected among her peers in the world’s airport industry for her financial skills and management talents, and she will be missed.” (Link to the Mayor’s blog post.)

Maureen has more than 30 years of experience in working in the airport industry. As an airport consultant in the 1990s, she saw first-hand the inner workings of numerous airports across the country. Working as the deputy executive director at Orlando International Airport provided Maureen the added experience with airline relations, customer service strategy and public outreach.

Maureen has been active in the airport professional groups and served as chair of the Airports Council International-North America (ACI-NA) in 2016. ACI-NA is one of five global regions that comprises ACI World, a trade organization of airports from around the globe. She also served as a member of the ACI World Board of Directors from 2012 through 2016.

“We can learn a lot from sharing experiences and information with our colleagues throughout the airport industry and use that information to create better operating results,” Maureen noted.

Before joining the airport industry in 1986, Maureen worked in public accounting for 11 years. She is a graduate of the Wharton School of Finance at the University of Pennsylvania and a Certified Public Accountant.